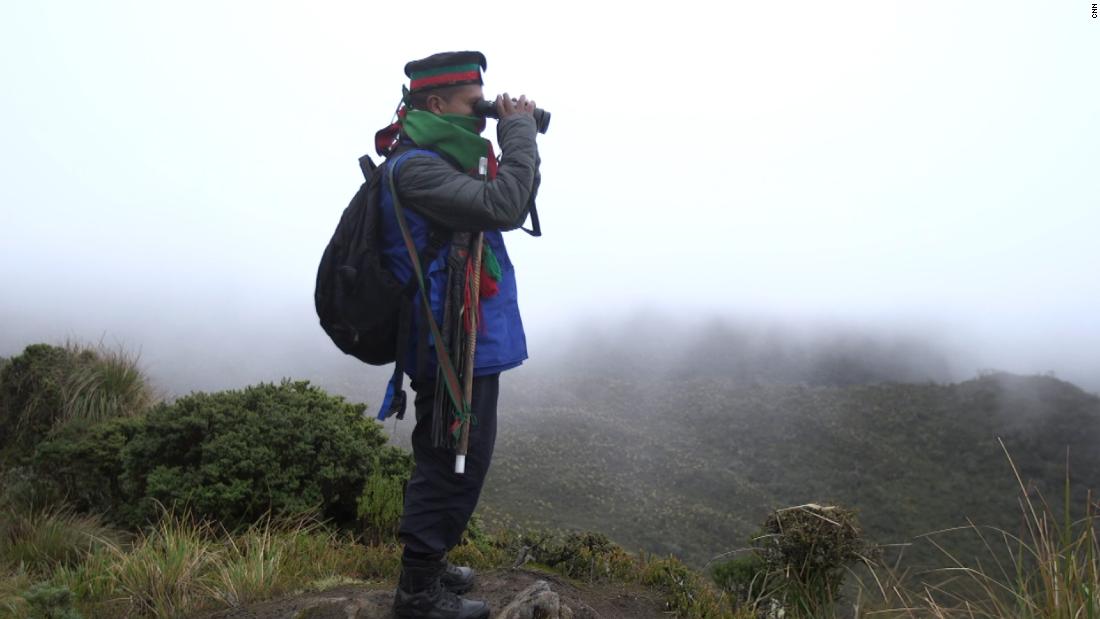 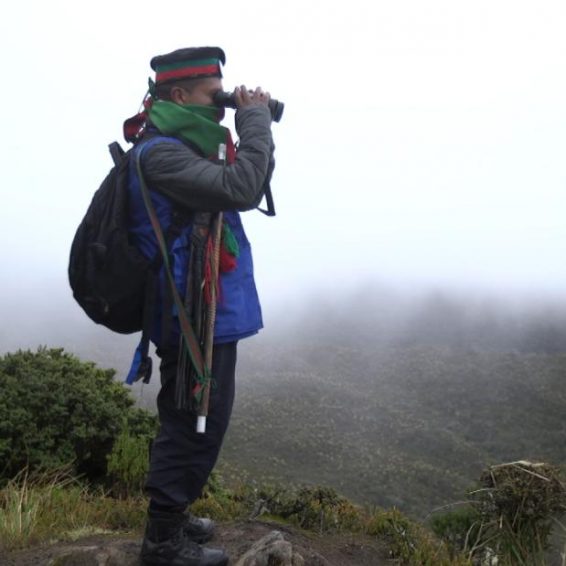 Colombia’s indigenous activists protect the environment. Now they too are under threat

2 weeks ago·6 min read
ShareTweetPinShare
Home
World News
Colombia’s indigenous activists protect the environment. Now they too are under threat
The content originally appeared on: CNN
In the indigenous reservation of Tacueyo in Colombia’s southwestern department of Cauca, that is the role of the indigenous guards, a voluntary, unarmed organization that controls access to the community and administers local justice in place of the regular police.
Armed only with sticks and machetes, these guards — called kiwe thegnas in the local Nasa Yuwe language — confront guerrillas and paramilitary groups who try to penetrate the community of Nasa indigenous people, who have been living across those mountains since before the Spanish colony.
The guerrillas are now mostly involved in the drug trade and in Tacueyo they control the cultivation of illegal crops such as marijuana and coca, the raw material behind cocaine. The guerrillas are former left-wing fighters who rejected the landmark peace agreement the government and the now-demobilized Revolutionary Armed Forces of Colombia (FARC) signed in 2016.
The clash between the indigenous guards and the guerrillas here concerns pristine water sources: a mountain range overseeing Tacueyo rises at over 10,000 feet above sea level and the water sources in the top of the mountains feed creeks and rivers down the valley and from then on to the major rivers of Colombia.
Read More
In a forest of frailejones, mountain sunflowers 6 feet tall that capture water vapor from clouds and release it to the ground creating water springs, Nora Taquinas, one of the leaders of the Nasa community, oversees the kiwe thegnas on patrol.
“If there was no more water here, there would be no water all across Colombia, the whole country would become a desert,” she told CNN pointing at the local vegetation and surrounding streams.
They are trying to preserve this space as a natural sanctuary of more than 350 hectares of wild terrain — but for drug trafficking organizations, the same mountain range is a strategic location to control, a valuable outpost to provide shelter in their fight against the state.
And the clash between the two is turning deadly.

The threat of death

Protecting the environment is a dangerous job in Colombia. According to the international NGO Global Witness, Colombia was the world’s most dangerous country for environmental activists last year. And of 290 environmental murders identified by Global Witness over the last decade in Colombia, 117 were indigenous.
In Tacueyo, the scars of this struggle are visible to everyone who’s entering town: a large signboard memorializes an indigenous leader, Cristina Bautista, and four kiwes who were murdered in their car on October 29, 2019, in an ambush on the main road.
Authorities and eyewitnesses who spoke with CNN blamed the attack on the local guerrilla group Dagoberto Ramos and in June 2020, Colombian army units claimed to have captured the alleged guerrilla fighter behind the assassination.
Taquinas, a single mother of two in her early 30s, survived the 2019 attack. “I was just there, behind that turn of the road,” she told CNN when visiting the place where her fellow guards were ambushed and shot at. “I crawled behind the car’s engine, and that stopped the bullets.”
227 people were killed defending the environment last year, a new report shows. That’s a record.
She has since replaced Bautista as one of the most prominent leaders of the community. But with great responsibility also came greater risk: She has received threats from different criminal organizations, and in 2018 her name in 2018 was added to a list of leaders with a bounty on her head by one of the largest paramilitary groups in Colombia.
Criminal organizations often publish such lists as a way to exert control over a territory, and to target the most vocal opponents to their actions. Bautista, Nora’s leader who was assassinated in 2019, was also threatened.
Taquinas shrugs at the threats. “Of course, sometimes fear pushes you away from the struggle. But when that happens, you feel alone, abandoned, and then you look at the fight that other people have begun, people that have been murdered, and their murder has become inspiration for younger generations to rise, so you join and fight up again,” she told CNN.
Her environmental activism mixes with social issues in her community. Taquinas oversees projects of sustainable development of water sources like a trout farm to sustain the local economy and create jobs to prevent more people join the guerrilla or the coca crops.
Projects to develop Tacueyo as a sustainable tourism destination have also been launched. This puts her even further in collision with the guerrillas, who don’t control Tacueyo but whose presence is felt every day. Carmenza Cuchillo and Juan Peteche, who administer the trout farm on behalf of the community, both told CNN they had been approached by guerrillas several times to demand the payment of a “protection fee” for the farm.
“The presence of these groups has been growing steadily since 2018, now there are several of them. They are not ideological, all they care is the money; my predecessor left the job because of the threats, I’m still fine, but there’s definitely more fear,” Peteche told CNN.
Several of the young guards who work with Taquinas told CNN they have also been approached for recruitment.

What the government is doing about it

In recent months, the Colombian government has come under fire for the rising levels of violence in the countryside.
More than 88 massacres have been reported by human rights NGOs in the year so far, defined in Colombia as the death of three or more unarmed people in an attack. Cauca, the department where Taquinas lives, is among the most affected of all Colombia by such attacks due to the presence of criminal armed groups and the production of illicit drugs.
President Ivan Duque recently defended his administration’s security record, pointing out that homicides and kidnappings are at the lowest rate in the last 50 years across the nation. Still, critics and analysts are urging the government to do more to increase security in rural areas such as Cauca, where narcotics production is found and massacres are more common.
The United States is starting to pay attention to the issue: During a recent visit to Bogota, US Secretary of State Blinken urged the Duque administration “to increase and strengthen the presence of the state in rural areas.” In October, Democratic Rep. Jim McGovern visited Cauca specifically to meet with social and environmental leaders facing violent threats.
And while Duque’s administration is vocal in its pledges to fight climate change, much more could be done to protect the environment by increasing government protection and surveillance in areas under threat like Tacueyo.
“Protecting activists is almost a shortcut to climate action,” says Louis Wilson of Global Witness. “If you can uphold the rights of indigenous activists, if you can uphold the rights of land activists, of traditional communities; then they will do the job for us.”
“These people are fighting the climate crisis already because it is in their immediate interests, often their livelihoods or their survival is on the line,” she adds.
Because of the threats she received, Taquinas is already under protection by the Colombian state, who provide her with an armored car and two minders when she leaves home.
But the rest of her community is left for themselves, either to face criminals with no protection, or to join them.
Taquina’s latest project is a school to train the next generation of the kiwe thengas, hosted in a farmhouse on the road to the mountains.
There she draws big plans for the reservation on a white board, urging her team to continue the struggle. Twenty hectares have already been rewilded, but 350 more remain. Of 37 water sources in the reservation, just 11 are monitored and protected.
“I’m fine if my time on this earth is cut short,” she told CNN with a smile, “but I want to be sure there’s someone to take up the fight.”