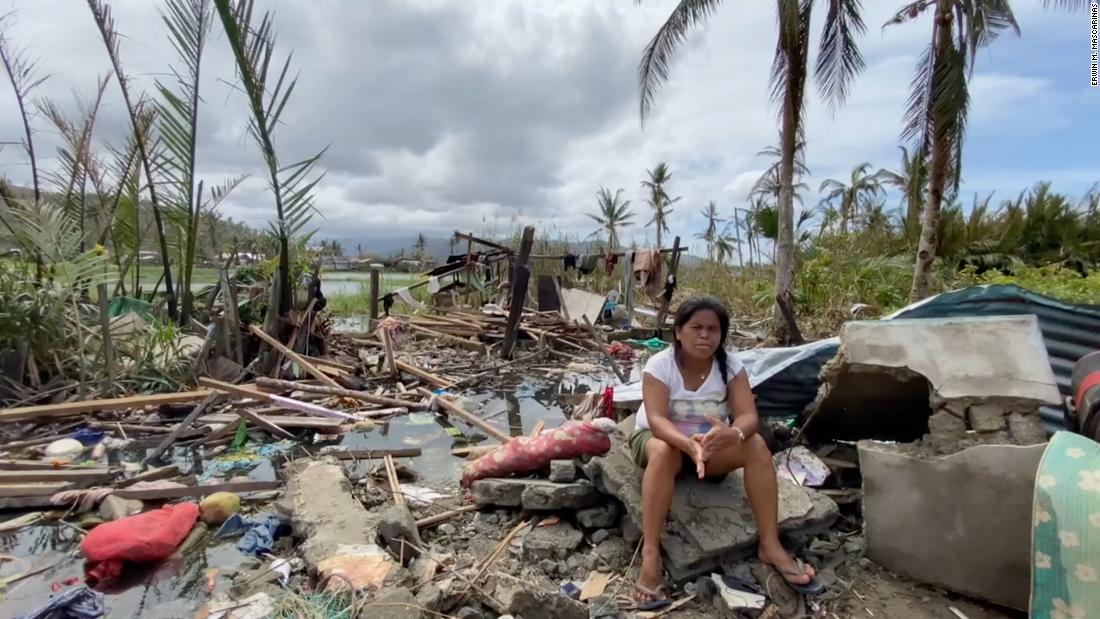 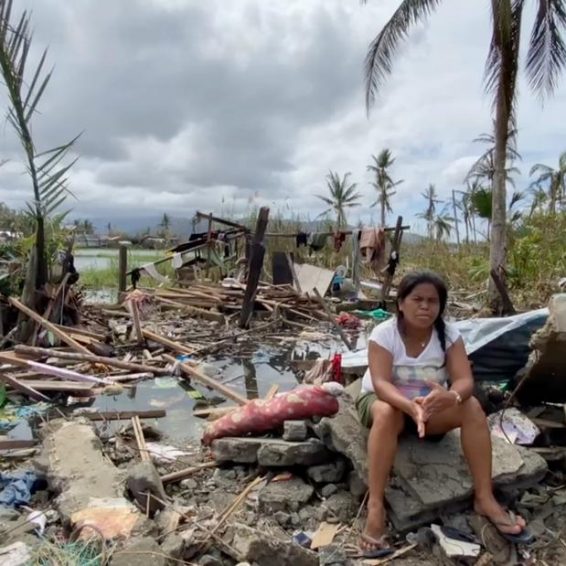 Homeless and hungry at Christmas, typhoon survivors struggle to rebuild

Surigao City, Philippines (CNN)Usually, Jay Lacia wakes at midnight on Christmas Day to start the festivities — but this year, all he wished for was enough food to eat.

“We always celebrated Christmas, but for now, it’s too hard,” the 27-year-old father of one said, as he sat among rubble in the typhoon-hit city of Surigao, at the northeastern tip of Mindanao in the Philippines.
Broken wood, scraps of metal, and plastic waste line the shore, where an exhausted stray dog sleeps. The stench of waste and dead fish engulf the air.
More than a week after Super Typhoon Rai — known locally as Odette — slammed into the Philippines, Lacia has given up trying to salvage whatever is left of his home. Not a single house stands anymore in his village on nearby Dinagat Island.
“Everything was gone, including my house,” Lacia said. “The roof, and any wood that we built with, was gone.”
Jay Lacia sits among crumbled homes, fallen trees and broken power cables. He lost everything when Super Typhoon Rai hit the Philippines on December 16.
Read More
Nobody expected the wrath Rai would unleash when it struck the archipelago on December 16. It was the strongest typhoon to hit the Philippines this year, killing nearly 400 people, while displacing hundreds of thousands more.
The Philippines experiences several typhoons a year, but the climate crisis has caused storms to become more unpredictable and extreme — while leaving the nation’s poorest most vulnerable.
Families like Lacia’s lost everything. And now, they face the nearly impossible task of rebuilding their homes without enough food to eat or water to drink.
“We thought we were safe because we tied up our house. We thought that was enough to keep it from collapsing,” he said. “We put a weight on our roof to keep it from being blown away. Unfortunately, it wasn’t enough.”

Nearly 4 million people across more than 400 cities were affected by Typhoon Rai, according to the Philippine National Disaster Risk Reduction and Management Council (NDRRMC).
More than half a million remained displaced during Christmas — one of the most important holidays in the Catholic-majority nation.
“Families have nothing,” Jerome Balinton, humanitarian manager for Save the Children said. “Bright lights and Christmas music is replaced with dirty, humid evacuation centers. Their only wish this Christmas is to survive.”
Replay
More Videos …

Super Typhoon Rai leaves behind death and devastation in Philippines 02:09
Jovelyn Paloma Sayson, 35, from Surigao City evacuated to her community’s parish church before Rai struck. Her fragile hut made from wood, plastic and metal, did not withstand the storm’s powerful gusts of wind.
“The roofs of every house were flying everywhere,” the mother of seven said as she sat amid the ruins of her home. “Our house was the first one to collapse. First the roof flew off. Then the foundation crumbled. After my house was destroyed, my mother’s house collapsed.”
All of the family’s food was destroyed by floods. Their stock of rice — a staple for the Southeast Asian country — was floating in muddy water next to broken pieces of wood. Sayson’s children’s clothes are ruined from the rain, and her furniture reduced to fragments.
Sayson’s kitchen appliances were stolen in the aftermath. She cannot afford to rebuild from scratch, she said.
“We need money to rebuild our house,” she said. “We are not dreaming of having a mansion. All we want is to have our own house to live in so that our children are safe.”
Despite the trauma, her family still gathered to celebrate the holiday.
“We had nothing to eat,” Sayson said. “Someone gave us sliced bread, and canned goods. Even though we are poor, we have a party every Christmas.”
Residents salvage what’s left of their damaged homes following Typhoon Rai in Cebu, central Philippines on December 17, 2021.

More than 1,000 temporary shelters have been set up to house those whose homes have crumbled, according to the NDRRMC.
For many of the displaced families, the trauma and suffering is unbearable.
Alvin Dumduma, Philippines project manager for aid group Humanityand Inclusion, said it’s “exhausting” for families to try and rebuild their homes “while starving and thirsty.”
Cramped inside unsanitary evacuation centers with no running water, he is concerned about the potential spread of diseases, including Covid-19.
“The conditions in the evacuation centers are far from ideal. It’s unhygienic. Thousands are sleeping under one roof with no clean water,” he added. “Children aren’t going to school. There is no electricity either. They will be stuck like this for a long time.”
Dumduma said the disaster has also devastated these families’ livelihoods.
Toppled electrical posts line a street in Cebu, central Philippines, after Typhoon Rai on December 17, 2021.
“Many are from fishing or farming communities whose boats and land have been destroyed,” he said. “They will struggle a lot to build back their business.”
Philippine President Rodrigo Duterte said the government will raise money for the rehabilitation and recovery of typhoon-ravaged areas. The United Nations has also promised more than $100 million in aid.
But Dumduma said much more needs to change at government level to avoid such devastation from future storms.
“Chaos unfolded because the government was not prepared. They must strengthen their disaster and response program,” he said. “We need more training, more preparation and early action.”
CNN has reached out to the NDRRMC for comment but did not hear back before publication.
Motorists speed past fallen coconut trees at the height of Super Typhoon Rai along a highway in Del Carmen town, Siargao island on December 20, 2021.

Effects of the climate crisis

Located along the typhoon belt in the western Pacific Ocean, the Philippines regularly experiences big storms — but the climate crisis has caused these events to become more extreme and unpredictable.
As the climate crisis worsens, cyclones are becoming more intense and destructive. Rai evolved rapidly from the equivalent of a Category 1 to a Category 5 storm in just 24 hours, packing winds of up to 260 kilometers (160 miles) per hour.
And the country was not prepared for a disaster of this scale.
Kairos Dela Cruz, deputy head of the Institute for Climate and Sustainable Cities, said developing countries are reaching their limit of being able to handle natural disasters on their own and those that live in low-lying, coastal areas will soon lose their homes to rising sea levels.
A study published in November by researchers at the Shenzhen Institute of Meteorological Innovation and the Chinese University of Hong Kong found typhoons in Asia could have double their destructive power by the end of the century. They already last between two and nine hours longer and travel an average of 100 kilometers (62 miles) further inland than they did four decades ago.
Rescuers help residents over floodwaters caused by Typhoon Rai as they are evacuated to higher ground in Cagayan de Oro City, southern Philippines on December 16, 2021.
The climate crisis also exposes systemic problems in the Philippines, Dela Cruz said.
“We need more resources to help us and (we should) play a stronger role internationally to push for more climate finance,” he said.
According to Dela Cruz, a storm of Rai’s scale in December is unusual for the Philippines, which usually experiences typhoons from June to September.
For Alita Sapid, 64, the effects of the climate crisis are clearly visible.
“We have had typhoons before, but this was extremely strong,” she said of Rai. Sapid stayed at home in Surigaowith her husband, daughter, and four grandchildren when the typhoon hit, but as the water seeped in, they decided it was time to evacuate.
Alita Sapid’s roof blew off her family’s home during Typhoon Rai.
“I told my husband to get out of here because we might die here,” she said. “My grandchildren had to crawl on the roads because the wind was so strong.”
The roof of Sapid’s home is completely destroyed. With nowhere to go and no money for now, the family have no choice but to sleep in their exposed home — whatever is left of it.
“Aside from thinking about what we were going to prioritize in the repair, we are also thinking about how we can get our food,” she said.
“We have not received any help yet. We are just waiting for someone to help us.”

A long road to recovery

Lacia, from Dinagat Island, will relocate with his wife and child to Surigao. It is safer there, he said.
“My neighbors are no longer (in Dinagat). Most of them have left because there is nothing left in our neighborhood,” he said.
All he has left to his name are some matchsticks, a box of rice, dried fish, and canned goods.
“In my family, we really need help so we can rise again and return to our livelihood,” Lacia said.
“Odette really was a Super Typhoon,” he said. “We lost our home, damaged by the force of the wind brought by the storm. We did everything, but it still was not enough.”