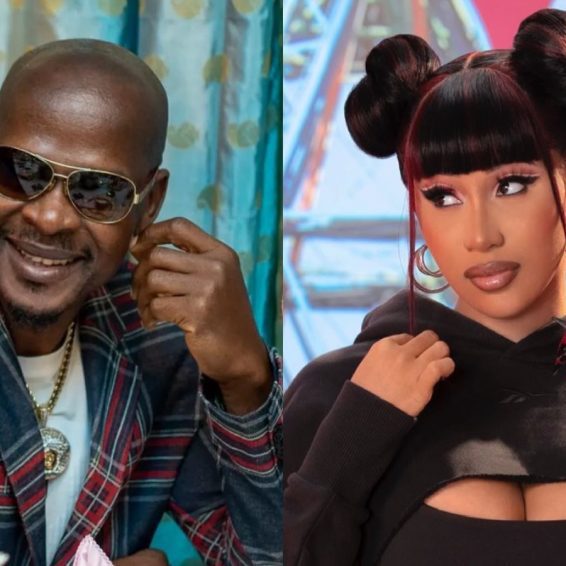 Mr. Vegas praises Cardi B for her authentic love of the Jamaican music style, dancehall while criticizing Drake and Nicki Minaj in a recent Instagram post.

The post shows a screenshot of Cardi B’s party sign where Mr. Vegas and the Bronx rapper are tagged with the caption, “CARDI SINCERELY LOVES DANCEHALL, UNLIKE DRAKE AND NICKI. SHE DOES NOT SEE IT AS A LITTLE FLAVORING FOR ALBUMS OR REMIXES. THE QUEEN DEDICATED HER BIRTHDAY TO WI CULTURE (PASSA PASSA DANCEHALL). THIS IS HOW YOU KNOW SHE IS NOT A VULTURE.” He later removed their names, but the comments still depict a half-sided debate on the matter.

The dancehall veteran has since edited the caption to remove Nicki Minaj and Drake‘s names after some fans criticized him for trying to stir unnecessary controversy.

Drake and Nicki Minaj alike feature Jamaican artists on their tracks, and they try to incorporate the Jamaican accent, slang, and dialect, patois, in their songs. In 2019, Drake signed Popcaan to his OVO label, and he has continuously made collaborations with the artiste. He has been spotted with many other local artists, such as Shenseea and Mavado, and his music has, more often than not, featured Caribbean rhythms and flows.

Nonetheless, he has teased a collaboration with Popcaan over the years, and it was finally achieved in Popcaan’s latest album, but on Certified Lover Boy, Popcaan didn’t get any feature. This is not the first time that he has done this. He removed Popcaan’s verse in Controlla as well after the teaser had been released.

Nicki Minaj, herself, has frequently shown love towards Jamaican artists and even to Jamaican track stars during the 2020 Olympic Games, showing her investment in not only Jamaican music and culture but in the island’s current events and people. Over the years, she has racked up numerous collaborations with many Jamaican artistes like Gyptian on “Hold Yuh[Remix]” and on the track “Gunshot” with Beenie Man, “Touchdown[Remix] featuring Stylo G and Vybz Kartel, and she had made a recent appearance on Skillibeng’s “Crocodile Teeth” remix. She has shown interest in collaborating with other new artists such as Intence and Shenseea but is her interest-based more so on capitalizing on the allure of Jamaican Dancehall artistes rather than genuine love?

Many fans disagreed with Vegas’ harsh comments, with one commenter even noting, “This clown stuff. You could of just showed Cardi genuine love without bringing Nicki into it… Then wonder why it’s beef. It’s y’all grown men keeping it going.”

Though some agree with his sentiments, many artists only began to look into Jamaican talents when Afrobeat and Dancehall boosted popularity in the last few years. This is noted in Drake signing Popcaan to his label but not featuring him in any songs in his album, according to some fans, who feel the Toronto rapper should give the Unruly Boss more strength.

DJ Khaled is another artiste/producer who invest heavily in dancehall, and, more so, Jamaican culture. He has shown his obvious love for Jamaican culture by indulging in the island’s food, music styles, collaborating with artistes, and his occasional visits to tourist sites and main cities. Much to the amusement of the island natives, he frequently tries his hand at patois and is very slowly but surely getting the hang of the dialect.

So what determines genuine love from clout? Could Vegas be right that these international artistes should be making music with Dancehall artistes from a place of genuine love and care for the musical art form?

The genuine love for dancehall should go past the want for profit. International artistes that collaborate with Jamaican dancehall artistes may deem it as a profitable move based on the trend leaning towards Dancehall rhythms and Afrobeat. However, it should not be solely based on monetary gain, artistes should pay homage to the craft and help to nurture the growth of these Jamaican artistes who otherwise would have a more difficult time garnering international acclaim.

Another question circles in the air on the real intent of the post.

Mr. Vegas is seen as a supporter of justice and honor, but many fans speculate that this act may not have innocent origins. Fans believe that he made this comment because of the opportunity Cardi B gave him to perform at her birthday Passa Passa. Before the inflammatory post, he posted a video of his performance with the caption, “Bless up queen @iamcardib on your earthstrong, last night was lit!! Big up to @francismanagement for making this happen!!! #birthdayparty #California #francismanagement #dancehall #partyvibes @offsetyrn @mrvegaspromo @intl_starr.”

His music career has been on a decline since the early 2000s, and this birthday event could help to stir things back in place for him. His message may have come from a good place because there has been increasing concern on whether international artistes genuinely care about local artistes and the growth of their musical styles but was that truly the only reason?