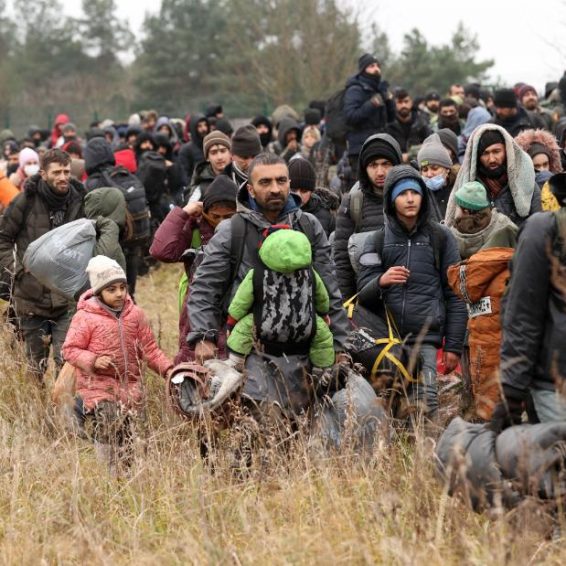 3 weeks ago·3 min read
ShareTweetPinShare
Home
World News
Poland, Lithuania and Latvia consider triggering NATO’s Article 4 over Belarus border crisis
The content originally appeared on: CNN
Polish Prime Minister Mateusz Morawiecki told the Polish Press Agency on Sunday that the three countries were in talks on whether to trigger the article, which calls for consultation when “the territorial integrity, political independence or security of any of the parties is threatened.”
A NATO official said last week that the military alliance was monitoring the escalating situation and that “NATO allies stand in full solidarity with Poland and other allies affected by Belarus’ instrumentalization of migrants.”
The official said Belarus “bears responsibility for the crisis and the Lukashenko regime’s use of migrants as a hybrid tactic is inhumane, illegal and unacceptable.”
Polish border guards used loudspeakers on Monday to warn people at the Kuznica-Bruzgi crossing that force may be used against them if they don’t follow orders. The authorities also deployed a helicopter and a water cannon into the area, although the water cannon has not been used. A column of police vehicles has been seen approaching the border.
Children caught up in Belarus-Poland border crisis face bitter nights without shelter
Read More
Thousands of people have been trying to cross into Poland in recent days, sitting on the ground near the border crossing despite the near freezing temperatures. Katarzyna Zdanowicz, a spokesperson for the Polish Border Guard, told CNN on Monday morning that around 4,000 people were camped out along the border and that the situation was “very tense and very dangerous.”
Zdanowicz said there had been “forced mass attempts to cross the border” in the Kuznica area by a group of 60 people on Sunday night. Those who tried to cross behaved “aggressively,” according to the border guard service. They threw stones and branches at Polish border police, she said, adding that weapons were being “pointed towards our servicemen” and a “flare gun” was fired towards them.
More people were heading to the area on Monday. A CNN team witnessed thousands of people in the Bruzgi migrant camp in Belarus pick up their bags and start moving towards the Polish border on Monday morning.
A rumor started circulating in the camp that the Polish government might open the border and allow a humanitarian corridor through to Germany. Poland has adamantly denied this and people amassed in the area have received text messages from Polish authorities saying the information was a “total lie and nonsense.” The SMS message, also received by members of the CNN team in the area, reads in part: “Poland won’t let migrants pass to Germany. It will protect its border. Don’t get fooled, don’t try to take any action.”
Belarus’ State Border Committee said the people moving towards the border have “purely peaceful intentions,” according to Belarus state media BelTA.
“The refugees gathered warm clothes, tents, sleeping bags, hoping for a positive outcome of the situation. By noon, they self-organized into a large column and began to move towards the Bruzgi checkpoint,” Anton Bychkovsky, the official representative of the border committee, was quoted as saying.
Meanwhile, the European Union will extend sanction against Belarus on Monday, the European Union’s foreign policy chief Josep Borrell said ahead of a meeting in Brussels.
“Today we are going to approve a new package of sanctions against Belarusian people responsible for what’s happening … and we are going to launch a framework in order to implement other sanctions to other people, airlines, travel agencies and everybody involved on this illegal push of migrants in our borders,” he said.
Tensions are rising on the Poland-Belarus border. Here’s what you need to know
Borrell said he spoke to the Belarusian foreign minister over the weekend, telling him “the situation on the border was completely unacceptable and that humanitarian help was needed.”
He said the European Union is “at the time being not talking about military” being deployed.
German foreign minister Heiko Maas warned that flyover rights and landing slots could be denied to airlines that continue to transport refugees to Minsk. Maas also praised Turkey for stopping further flow of people into Belarus.
“All airlines should follow the example of Turkish Airlines and others and stand against Lukashenko’s human trafficking business. There will be severe sanctions imposed on all of those who will not comply,” Maas said on Sunday.